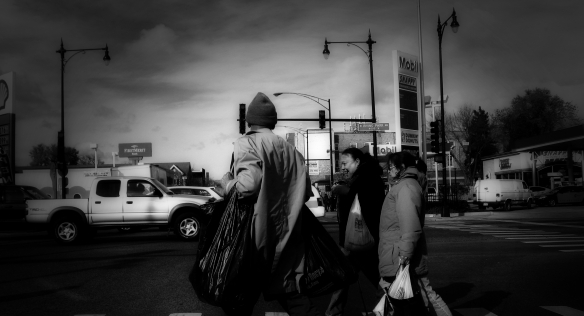 I was looking through our digital camera today and came across some pictures I took in Chicago last November. I thought with some decent edits, they would be worth sharing. Wanting to do a dream like effect on the pictures as I had done to some of my mobile photos, I googled “gimp dream like effect”. Google introduced me to Vishaaa and these edits come courtesy of her Orton Effect Tutorial. “The Orton effect is named after photographer Michael Orton who first used the technique. Combining two photographs, one image is sharply focused and over exposed, the other, out of focus and over exposed. The combination of blurring and over exposure will give you the dreamy like mystical effect…” I followed the tutorial exactly until the last step. Instead of setting the duplicate layer to overlay, I set it to multiply and lowered the opacity. I did some obvious things (desaturate) and some not so obvious things (tweak the curves and white balance), but nothing too heavy. Check out the tutorial, pay respects to Orton and edit some photos! Enjoy!

Note: The photo of the Keyboard and the photo above have the Orton Effect. You can compare the difference of the feature photo and the photo at the bottom of the gallery. The latter does not have the effect.

2 thoughts on “The Orton Effect”